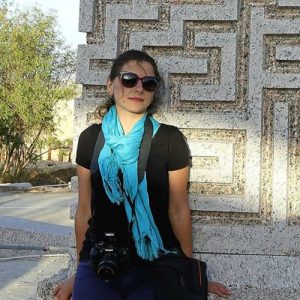 Ana Maria Negara was born on August 9, 1984, in Braila, Romania, she get a PhD in visual arts at the University of Arts „George Enescu” University with the thesis „Tradition and modernity in contemporary sculpture”, and she made a masterclass sculpture (2008-2010) after a B.Sc. (2008), with the same specialization at the „University of Arts” George Enescu „Iasi, Romania. In 2010, Ana Maria is admitted as a member of the” Union of Professional Artists (UAP) in Romania; She presented three solo exhibitions of sculpture – „Artistic Interference” (2008, 2009) and „Inside” (2013), in galleries in Iasi, Romania. She has published articles in various art theory and specialized international journals and has been invited to various national and international sculpture- Symposiums,  8th Tehran International Sculpture Symposium,  Teheran , Iran,  6th Kömürcüoğlu, Denizli, Turkey (2016), Aswan, Egypt (2016), Ostraka (Egypt), Panevezys, Lihtuania (2015), Braila, Romania (2015), Craiova, Romania (2015), Targu Jiu, Romania (2014), Caransebes, Romania (2014), Stanisesti, Romania (2014, 2013), BE Iasi, Romania (2012- 2016), Retezat, Romania (2008-2015), Hodora, Romania (2008). Ana Maria Negara and was artistic director of the international symposium „Gorj Fest” in Targu Jiu, Romania (2012) and the organizer of the International Art Symposium Retezat  in sculpture department between 2009-2013, she participated in various collective exhibitions, national and international, and has received several awards including the „Award for Sculpture ‘Union artists from Romania (2015). Between 2014-2015, she held a teaching activity (assistant professor) in the Department of Sculpture at the University of Arts „George Enescu” in Iaşi. Her artistic concept is built on the relationship between expressive and conceptual forms of tradition and those of the recent era.